The cryptocurrency market is a relatively new market. Anything is possible here. Yesterday you invested in one of the most promising cryptocurrencies, and today you are sitting with bags full of depreciated LUNA.

For new technology markets, this is commonplace. Similar events have occurred in the nascent Internet technology market. Since the collapse of the dot-com bubble, only 2 companies have managed to survive to this point. Amazon and Meta.

A similar outcome is likely in the cryptocurrency market. Only a few will survive. That’s why you have to constantly re-evaluate your views. Question what has long been taken for granted.

That is what we are going to do today.

Bitcoin and its narratives

The first cryptocurrency created a large number of narratives justifying future growth as it progressed. People willingly believed that bitcoin was insurance against inflation, a future global reserve currency, a base-level blockchain, and so on. The tremendous growth during bull markets confirmed these beliefs. Over time, however, it became increasingly clear that these narratives were wrong. The bear market of 2021-2022 finally put an end to some of them.

Let’s take a closer look at the main narratives below.

Narrative argues that bitcoin will become the worldwide network for payments without intermediaries because it is fast, reliable and cheap. Unlike banks, it allows you to quickly send money anywhere in the world without any restrictions.

I have to agree that bitcoin is in many ways more convenient than the banking system, but it also competes with other cryptocurrencies. How is bitcoin better than XRP, QNT or LTC? Each of them not only has the same properties, but also surpasses bitcoin in a number of ways. For example, Quant can integrate with existing banking systems, which makes it much easier to use blockchain not only for ordinary users, but also for institutions.

Additionally, it is not clear why an individual should choose bitcoin over Stablecoin to send funds. After all, bitcoin is a volatile asset and can lose value during a transaction, while stabelcoins avoid that.

This narrative states that bitcoin’s superiority over national currencies will sooner or later lead to its acceptance as a reserve currency by various institutions and states. Thereby replacing the dollar and making bitcoin the global reserve currency.

It would seem that this narrative holds true because El Salvador and the Central African Republic have already declared bitcoin a legal tender. However, these countries do not have much influence in global politics. They accept bitcoin because of the weakness of their economies and, as a result, the weakness of their currencies. Countries with strong currencies, such as the U.S., EU countries or Japan, not only will not accept bitcoin themselves, but will put all kinds of pressure on other countries to prevent it. For example, the IMF is right now demanding that El Salvador give up bitcoin. Strong national currencies allow developed countries to “endlessly” print and borrow money. Therefore, they will prefer independent bitcoin to controlled CBCDs, which are already being actively tested by a number of countries.

The narrative is that states print trillions of dollars in national currencies thereby depreciating them, and bitcoin has a programmed issue that only decreases over time. Bitcoin was thought to avoid depreciating its funds due to inflation, but the bear market of 2021-2022, has completely destroyed that narrative.

Keeping funds in a depreciating dollar turned out to be more profitable than in deficit bitcoin. More profitable by about a factor of 3.

The final narrative we will look at today is that bitcoin is the base level blockchain on top of which blockchain technology will be further developed and implemented.

While it was still possible to believe this before 2020, it is now clear that it is incorrect. The main blockchain innovations at the moment are being built on top of ethereum. The last person to promote, this narrative was Do Kwon, after the collapse of the moon there was no return to it.

An interesting fact is that the Bitcoin Foundation considered implementing smart contracts on the network, but most members decided against the idea. To me, this speaks volumes about the sectarianism of the bitcoin development company. Perhaps if this proposal had been accepted, the cryptocurrency market would be very different today.

To summarize, unfortunately, all of the old bitcoin narratives proved to be wrong. We don’t have any new narratives. And there aren’t any in sight. One might wonder here: why then is it still the cryptocurrency with the largest capitalization? The answer is pretty simple. Bitcoin is the first and, as a result, the most liquid cryptocurrency. Institutions investing in cryptocurrencies often choose bitcoin because of its liquidity, because they simply cannot invest in projects with little liquidity. It’s like trying to put a soccer ball in a tin can. You can, but most likely the ball, the can, and the person trying to do it will suffer.

Who else but Bitcoin?

Against the backdrop of bitcoin’s weakness, Ethereum is looking better and better. There has already been a long discussion in the community between opponents and supporters of a possible bitcoin flip with ether, and after the successful Merge, the latter has definitely gained weight. Understandably, ether has now become “deflationary” and environmentally friendly. Two of the strongest narratives have added to ether’s already strong positions at once. In order for you to understand how strong these narratives are, let’s look at each of them separately.

The graph below shows perfectly how much Merge has reduced ether emissions. In just 48 days after merge, the difference is already ~3.6%. For a cryptocurrency with a circulating volume of 120 million tokens, this is very high.

It is important to note that ether burn will increase as activity online increases. That is, in a bull market, ether will be highly deflationary, which will lead to an even greater increase in price.

Against the backdrop of global warming, which is especially strong in the U.S. and Europe, the public is becoming more and more inclined toward greening our livelihoods. We’ve all heard about how much electricity PoW cryptocurrencies consume. Every once in a while, politicians pop up to raise the issue. So far their attempts have not been successful, but given current trends, it’s only a matter of time. Ether, with its move to PoS, not only got rid of the risks associated with the PoW ban, but also strengthened the trend of “greening” cryptocurrencies. Merge has shown that even a “dirty” cryptocurrency can become green. I think we are yet to see the consequences of this event.

By comparison, the possibility of Bitcoin switching to PoS was also discussed at the Bitcoin Foundation, but was rejected. It is immediately clear which project is being developed by progressive guys and which one is a sectarian.

In addition to the narrative created by Merge, we would like to note that the main problem of ether – the problem of scalability – is actively being solved by developers. At the moment we have about 8 roll-ups that allow ordinary users to use ether without large commissions. Some of them are particularly successful. For example, according to Delphi Digital, Arbitrum now accounts for 62% of weekly ether transactions. 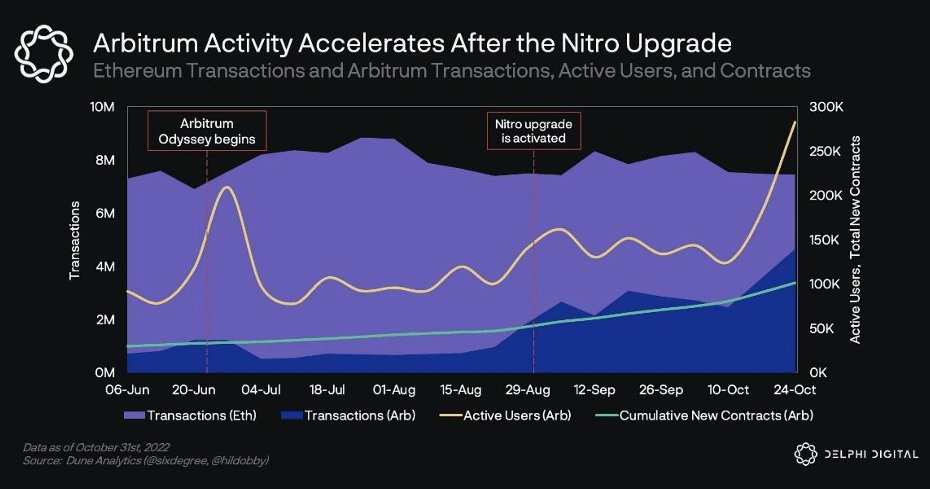 Bitcoin is certainly still the main cryptocurrency on the market. Provided there is no black swan, it is likely to hold its position for a long time yet. However, we cannot ignore the fact that the situation is gradually changing. Bitcoin’s position is weakening over time, while ether’s position is strengthening. Merge has significantly widened the technological gap between bitcoin and ether, and thereby accelerated these processes. It is likely that sooner or later ether will overtake bitcoin in terms of capitalization. When that happens, or better yet, in advance, we should pour all the bitcoin we have into ether without pity. There is no room for emotion here. Technology comes and goes. Bitcoin’s ashes will fertilize the cryptocurrency market and new disruptive technologies will grow in its place. We will be harvesting. The main thing here is to be flexible and switch to a new variety in time.